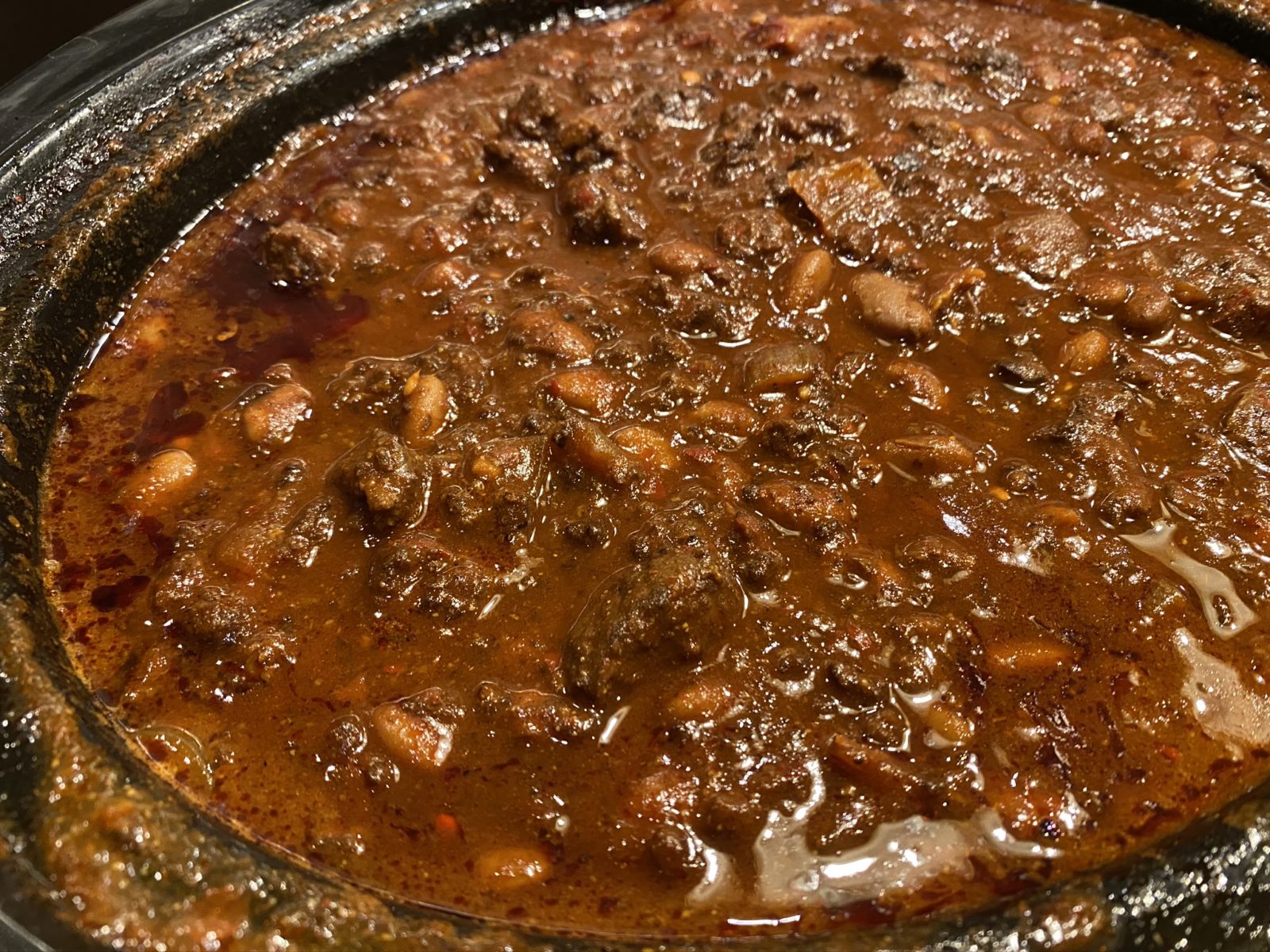 I love foods from all over the world, but I’m partial to my native Texas, and adopted New Mexican/Southwestern, cuisine. Chili (with an “i” in Texas) is one of the first things I remember cooking without adult supervision. Granted, I used a Wick Fowler’s 2 Alarm Chili kit, but hey, I was about 12! One used to be able to find good Texas Chili in restaurants in the 70’s (back when the first “Chili’s” restaurants actually served chili!). I guess it lost it’s trendiness. I now live near Waco and haven’t purchased a good bowl of Texas Chili in a LONG time. Result: I have to make it myself.

One day I had tons of game meat, time on my hands, and a craving caused by reading an excellent re-published Texas Monthly Chili Recipe from December 2015. Why not just use the Texas Monthly recipe, you ask? You could, but I think I add some interesting twists on it. First of all, I have written this for deer/elk chili (although it could be made with only beef). I also bring some tricks from beyond the Lone Star State.

Born and raised in Texas, but having lived in New Mexico for many years, I am heavily influenced by both cultures. Hands down, NM has the best chiles (with an “e”) in the world. I worked at New Mexico State University where the hybrid “Big Jim” (a.k.a. “Hatch” chile) chile was developed using a combination of hot Mexican chiles and larger, milder New Mexican ones. Chile is a high art form in NM and NMSU still operates a Chile Pepper Institute.

I’m not a competition chili cookoff guy, but I love good, rich, Texas Chili. To me, it is similar to NM “carne adobada”, which is made with pork and often served more as a side dish. In Texas, however, it is the main course.

Regarding beans: Texans believe beans don’t belong in Chili. I love them, but have to agree that, generally, Texans omit beans. But I love beans and include a modest amount. Shoot me!  I mean really, cowboys lived on beans!  I don’t know who started that “no beans” thing. If you’re a traditionalist, they’re fully optional.

A few illustrations of the chiles involved:

This whole process took 6-7 hours from start to finish. I recommend an evening start, then slow cook overnight so it can rest for a few hours before waking up. Spicy stew dishes are always better after they sit for a while.

I used about 5-6 lbs of game meat (a mix of ground and cubed elk, cubed deer, and a couple small deer tenderloins).  I browned it heavily (took a long time) and added onions and garlic at the end for flavor. I bought a big tub of Armour Lard at HEB and was very liberal with that when frying it. I did not add any more lard to the recipe. The Texas Monthly article called for 1/3 cup to be used to fry the meat. I used about that much, adding more after pouring off water and grease (see Prepping Game Meat Tips below). The end product still had a reasonable layer of grease on top even though I rinsed and drained the now oily game meat one final time before adding it to the slow cooker pot. I also scooped off the water as it cooked out of the meat (and much of the lard with it) from the meat when it was cooking. I added more lard when necessary (you don’t want the meat too dry).  With beef, you might pour off water and add lard, but no need to do a final additional rinsing of the meat. I use a big iron Dutch oven pot and large iron skillet to sauté all the meat.  I added the meat directly to the crock pot when it was ready.

If you don’t like that “gamey” flavor in game meat, the secret is to get the blood/juice out of it. This is not, in my opinion, achieved by using lemons or marinades. It’s about getting all the juice out of it. If you like your meat rare, you’d better like the natural game flavor because that’s where it resides. Frying and stewing is a great way to use game meat and still have the wife and kids love it. When frying, I’m always liberal with the oil I use to do this (often using leftover bacon fat, but any oil will do) and then end up spooning/pouring it out as the water and blood cooks out. If the meat is really lean and/or dry, a splash of water to get the juices out is sometimes helpful. A New Mexico ag extension specialist once gave me a good tip: Coating your meat with liberal quantities of canning salt in the field, right in the cooler along with the ice, will draw out lots of the blood. This gives you a good head start on removing the gamey flavor. (Don’t forget to rinse that salt out when you get home!)

The Chiles and Chilis

I used three kinds – NM dried, Ancho (HEB had both in bulk) and Chile de Arbol (HEB had in packets in Mexican spice section – didn’t find pasillas, so used these in lieu of).  I used about 8-10 Anchos (big dark red crinkly things), about 6 Chile de Arbols (skinny red), and about 8-10 small dried red New Mexico chiles (yes, with an “e”).

I broke all the dried chiles apart, cutting them open lengthwise, dumping seeds on counter and cutting off stems with scissors.  Big pile of seeds and stems was discarded.

The Anchos were dry, but just a bit soft to grind, so I dried them in the oven first. This was a great idea as it brought out the flavor, but keep a close eye on them so they don’t burn.  It took about 5-7 mins at 300 degrees.    These are delightful when roasted, and even better smelling when ground.  These Ancho chilis smelled like they were really the key ingredient.

I have a special coffee grinder that I only use to grind spices. I added the Anchos (oven toasted and broken apart now), 2 tbsp (lots) whole cumin seeds, a big tablespoon of coriander seeds (awesome), 1.5 tbsp paprika, and 1 tablespoon of whole Mexican oregano.  I ground them fine and dumped them straight into the crock pot, which was turned on as soon as I added the meat.  Note that I didn’t use any other pre-ground chili (or chile!) powder.  I added a tsp or so of sea salt and a tsb of black pepper, too. (At a later stage I always throw in a couple fresh jalapeños, sliced lengthwise in half.)

I added one cup or so of dried pinto beans to the crockpot along with all the spices and enough water (or chicken broth, if you’re using that) to fill it up. Yes, beans.  A sacrilege in Texas, but I like a few frijoles in there!  Just leave them out, if you don’t want them. There’s absolutely no difference in the recipe either way.

A local New Mexican taught me how to use dried chiles years ago when I asked how to use the “Ristras” (those beautiful strings of red chiles outside of homes, signifying warmth and hospitality).  You just boil them lightly in few teaspoons of water to soften them, let them sit in that water for 10-15 mins, then throw out the juice.  Toss them in the blender with a couple chicken bouillon cubes (real chicken stock would make this a whole lot better, but there were so many other rich ingredients I didn’t worry about it) and enough liquid for it to “catch” (maybe 6 ounces).   If you use real chicken broth, this would probably be the bulk of the liquid, so that would eliminate needing to add any water later. I use a high-power Ninja blender along with some of the stock from the crockpot and blended till a creamy paste.  This is how the New Mexicans I know taught me to do it.  You can add the oregano, etc., to the blender, too – especially if it’s not already in powder form (which it shouldn’t be – use dried, whole Mexican oregano).  Throwing in onion and garlic doesn’t hurt anything, either!

To the now warm crock pot I added:

This is all cooked in a crockpot for 2+ hours on high (including as I prepared it) and then when I went to bed I put it on slow cook for another 3.5 hours. All together, it cooked from about 7 PM to about 3 AM. In the morning it was perfection!